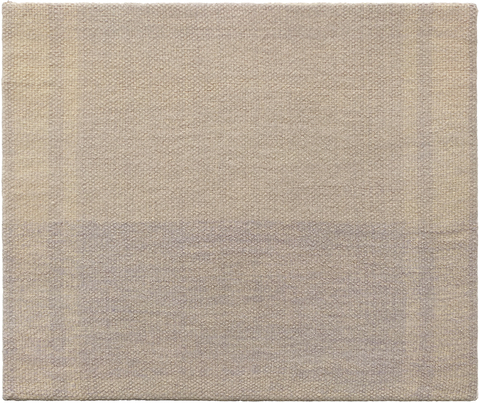 
This group of works is derived from two blankets that belonged to my Nana, my mother’s mother. She referred to them as the “nice” blankets. They were well-used and my mother kept them after Nana’s death. Stained, faded and worn, many years later Mom was going to discard them: I kept them. After looking at and thinking about them for a number of years, I have reconfigured them to speak about perception, history and time.

The title first refers to Murray Bay, Canada, a city on the Saint Lawrence Seaway where the blankets were made by women, some of them First Nation’s women. The blankets were of high quality and reflected a resurgent interest in crafts and the handmade (although the patterns were not indigenous). They were purchased by tourists and also commissioned for ocean liners. It’s unclear how my Nana acquired them, but they may have been a wedding gift.

The second part of the title, “Standing Wave” is a phenomenon described in physics. Explained in Dictionary.com, a standing wave “oscillates in place without transmitting energy along its extent. Standing waves have stable points, called nodes, where there is no oscillation. Examples of standing waves include the vibration of a violin string and electrons orbitals in an atom.” Standing waves seem an apt metaphor for the blankets where the strings of warp and weft converge and resonate with one another. They create nodes, oscillations and interactions from the energy of all of the conditions the material has been subject to and the people who have made or interacted with the blankets over time. Where the patterned fibers diverge, history and time pass through. My interventions with sewing, knotting and repairing allow me to engage in the history of the blankets- inserting myself- tying me to them and their history. My aesthetic choices in these interventions are made intuitively and often in the meditative state brought on through the repetitive process of stitching.

I am also working with the idea of human perception which is remarkable in its complexity and specific adaption for human life, but certainly not comprehensive in its scope. Perception is both dependent upon and subject to the “tricks” of illusions. One blanket suggests painted imagery- a seascape- sea and sky, obviously two dimensional, but spatially illusionistic. In some works, I have reassembled the blankets’ pattern from non-contiguous sections so that the pattern is retained, but a rupture or slippage is also visible. In some instances, the pattern’s shift is dimensional- so that the pattern appears continuous, but a difference in the physical structure exists in three planes. I also use mirroring and inversions of the pattern to evoke some of the limitations of human sight, the shortcuts, assumptions and projections our perceiving minds employ to make their particular sense of the world.
Loading...